Pixel : n.   the most basic unit of an image displayed.  Pixels are generally arranged in rows and columns; a given combination among the pixels of various brightness and
color values forms an image.
--as taken from the freedictionary.com

﻿I was well aware of the pixel as it relates to computers, printers and even television; but to think of a pixel in relation to a quilt was quite foreign to me, until I came across this quilt and this quilt.  I could not believe the work that went into each one and after reading my friend, Lynne's, hilarious account of which character she would immortalize in fabric if she decided to make a pixel quilt, I knew that I wanted to make my very own.

Only who or what would I choose?

Actually I didn't have to think too long about it, one look at my Netflix queue, living room wall, my car or any of the various gifts I had received for X-Mas last year sealed the deal.  It was about time that Doctor Who was immortalized my way in tiny little fragments of fabric. 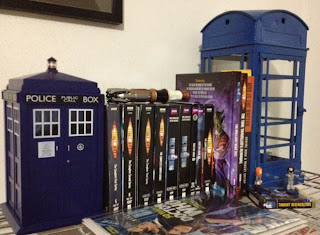 I chose to use Pic2Pat for my Photo conversion and could not be happier with the results.  I tested several different photos and graphics in multiple sizes, color arrangements and even styles before my mind was made up.

Update 1/28/14: For those asking about what stitch per inch I used in Pic2Pat...it was all trial and error. I believe I started with 14 (5.5 cm) and then played around with both it and the finished size until I was happy with my result.

I printed out the pattern and immediately visited my local craft store to pick out the corresponding DMC floss using the symbols on the patterns.  Why you ask?  Because Pic2Pat's main purpose is to convert photos to cross-stitch designs.  Now, I knew that the colors on the printout couldn't be trusted, so instead of taking chances, I bought the floss. 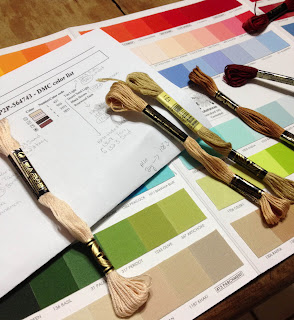 I pulled out my Robert Kaufman Kona Color Card and got to work matching floss to real fabric.  Some colors were super easy; but others not so much.  Rather then get it wrong and waste precious time, because obviously I have an unrealistic assumption of long this quilt would take to make, I bought small 1/4yd cuts of multiple colors from SewMamaSew so I could play with the real thing. 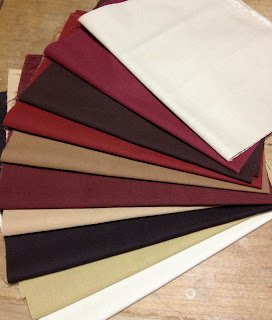 When the fabric arrived, I made the tough decisions of which to keep and which to add to the stash for a future project.  Now, how much yardage would I actually need?  Honestly, up until this point, I assumed that I would be making this quilt using 2 1/2" squares...Who was I kidding?  The reality is that I hadn't ever considered working with pieces smaller then that.  Yet, it wasn't until I actually had fabric in hand and started the calculation that I realized the quilt would be large enough to blanket a small village (okay, slight exaggeration); but it was evident that I'd have to work with smaller pieces.  Duh!

So, I did want any slightly neurotic; but not yet institutionalized quilter would do and compromised just a bit.  I was now starting a new adventure in making a hybrid-pixel quilt using both squares and rectangles.  You'll learn more about how the rectangles come into play in my next blog post.

As for figuring out the yardage, again I wasn't that interested in tally-ing all 7000 squares, so I completely guesstimated after counting a handful of "similiar" blocks.  Only time will tell if I need to order more fabric, or if I did in fact make a pretty observant calculation. 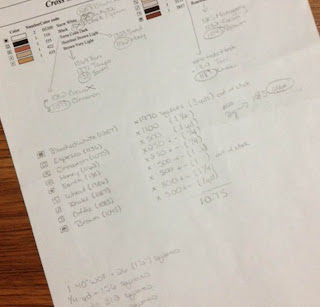 Now, I realize that I haven't actually shared what/who I am immortalizing; I'll share that in a later blog post.  For now, I wanted to share my process, hiccups along the way and maybe some encouraging words for those who have a pixel quilt or even a hybrid-pixel quilt on their To-Do list.
Who would you immortalize?