Time for an Upgrade

Change is the only constant in life.  – Heraclitus, Greek Philosopher

Earlier this year, I hired Beck from AutumnLanePaperie; whom I found on Etsy, to redesign my logo and create some additional graphics for my business. Working with her was a delight and she took the time to really help bring my many sides together; which let me tell you isn’t easy when my business/website name is St. Louis Folk Victorian and yet I make modern quilts. 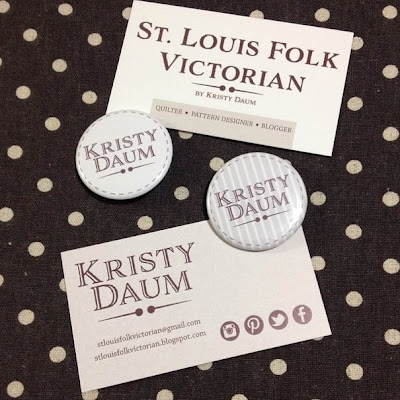 While I used the new graphics and logo on business cards and pins for QuiltCon; I didn’t make any other necessary changes until just a few weeks ago (nearly 7 months later).

After several recent conversations with quilty friends, and an unexpected opportunity; which presented itself via Facebook (crazy how things happen)…I quickly got back on the change train.

-          My website address is now www.stlouisfolkvictorian.com. Don’t panic, your previous bookmarks and links will automatically be redirected.

-          I also did a site redesign which helps bring all of those logos, graphics, and colors that Beck created for me back in February together in one place.

-          I spent lots of time reviewing my current pattern offerings (currently 6) and have decided to retire two of them (U-TURN and INDEX).  They are great patterns and performed well; but not to the level of where I had hoped.  This month will be their swan-song; so don’t miss your chance to snatch them up before they are gone forever (I’ve even put them on sale…WooHoo!!).  My PayHip Pattern Shop can be found here.

-          The remaining 4 patterns were all given a little facelift, as my style of pattern-writing has changed over the years, and I wanted them to now look consistent. These will be rolled out in the coming weeks; but if you purchased them previously...the info is all still the same, so you aren't missing anything except a more eloquent layout and maybe some color.

-          As part of the pattern facelift, I added barcodes; which makes it that much easier for shops to carry/sell my products. Plus, barcodes…I mean, that’s pretty cool!

So, that’s just some of the many things that have been on my plate, Dear Readers.  Now, don’t forget…head on over and check out those patterns before they disappear.